… it was a possibility voiced the day the chimney cleaner/fixer guy came to the house and she waved her arm in my direction saying “she’s not too bright”.

But since she’s lost those filters that prevent most of us from saying rude things about a person, especially when they’re standing right in front of you… I can cut her some slack.  So did the chimney guy.

However, the seed was planted.  And I’m wondering….

Last weekend the husband and I bought new smart phones and I don’t know why.

I was just looking because he was.  Doug likes the new toys – I like simple.

But somehow that salesman razzle-dazzled me.  When the Facebook feature appeared, I was hooked.  Before I knew it I’d signed on the dotted line and handed over my sweet little (old) phone so they could transfer my contacts list.

The phone I abandoned –  The battery charge lasted forever.  It never let me down.  And I knew how to make it work.

The new phone – That Facebook feature?  I have yet to figure out how to get there from here.  When I log into Facebook on my computer, my status says I have mobile connection.  But I just got an email telling me a mobile device has been deleted from my Facebook.  So how did that happen?

Yesterday I disconnected everyone who tried to call me.  Today I’ve managed to answer a few.

Manueuvering the touch pad to send a text just about makes me crazy… I need to put my fingers on a diet.

But at least I can make a basic phone call.  And I can take a picture as evidenced here…. 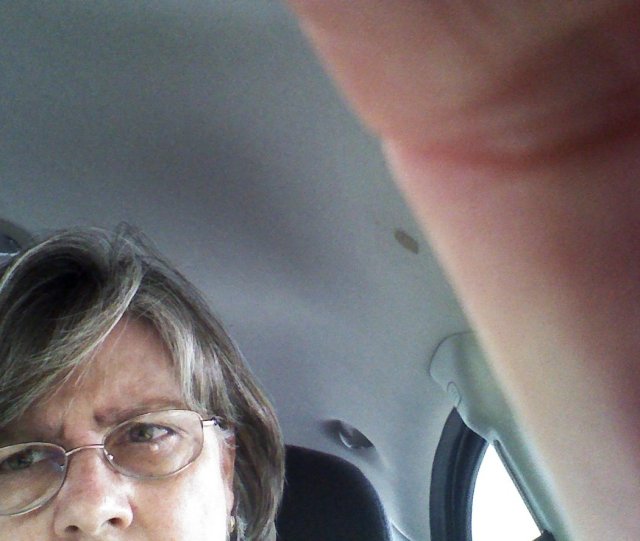 … except it was a mistake.  I pulled into the driveway and thought I was taking a picture of a swarm of ugly bugs on the wood shed.  Apparently I touched an icon that switched the camera around (mysteriously) so I actually took a picture of me.  Huh?

And once I figured out that little camera trick I thought I’d cheese it up a little and take one more.

To be perfectly honest I still miss my late 90’s brick phone.  It was substantial.  The buttons were big and easy to push.  It could potentially be used as a weapon when in dire straits.  And one never knows when one might be in dire straits.

Next weekend I get to see a few of my kids.  Maybe they can help me.

7 thoughts on “Am I bright enough for a smart phone??”