I grew up watching the adventures of Davy Crockett and Daniel Boone on TV.  My mother made me wear dresses, but my heart longed for a coonskin cap and buckskin jacket.

I was happy to learn both men weren’t just television caricatures, but real people who participated in the building of America.  In my child’s mind I saw them forever tracking bear through the woods and saving pioneers in distress.  As time went on I was a little less enchanted to learn Davy also wore normal clothing of the day, was a politician and had actually served in the United States congress.

Still, he had done adventurous things and visiting the Alamo, where Davy took his last breath, had always been on my ‘to do’ list.  It was the first major stop on our summer trip.

Along the way to the Alamo, we stopped in Pecos, Texas, where I learned more about Judge Roy Bean.  The “Hanging Judge”.  I’ve seen movies about the Judge, thought him an unappealing character and, until recently, a fictitious one.  But nope, he was really real.

And he wasn’t the “hanging judge”.  In fact, some say he never hanged anyone.  He was a heavy drinker,  had several children and abandoned them, he spent time in jail, and had a permanent rope burn on his neck when someone tried to hang him.  In his early days, it’s said, he sold firewood and milk for a living… milk he watered down so he could make a few more bucks.

He actually wasn’t a real judge, but as a convenience was named a Justice of the Peace so Texas Rangers had somewhere to process prisoners in that barren, wide open country.  On a more positive note, a couple of accounts say he was generous to folks down on their luck and that he kept the local schoolhouse supplied with firewood all winter long.

Maybe he felt guilty about selling all that watered down milk?

Of course, all we have are stories of either man.  Recently I read that even Davy Crockett’s death is controversial.  Apparently there were differing recollections.

Guess you had to be there to really know.

A person from my own life, who I saw as Davy Crockett and Daniel Boone rolled into one, was my grandfather.

I loved them, but he typically covered them with long sleeves.  Except for the tiny horse shoe on the crook of his hand where thumb meets forefinger.

When I was older he explained that they reminded him of a time when liquor was the love of his life… before God, before family… liquor first.  He told me of the day my dad drove him to the San Francisco morgue to identify one of his older brothers.  A brother he grew up with and loved dearly.  An alcoholic brother who died lost and alone.

Papa’s revelations about his life didn’t dampen my respect.  I spent time with him.  I saw how he behaved in good times and in tough situations.  I loved his honesty and desire to help others.  And yet, I’m sure there were some who had a completely different view of him… the ones who knew the dark side, the drunk side.

His tattoos reminded him he would be remembered that way… by some people… forever.

In today’s mixed up world where folks seem to trade truth for the gospel according to Facebook or Twitter, I can imagine Davy being villanized for being a congressman, Roy being raised to hero status and Papa’s character annihilated.

I loved our time in Texas.  As I considered how immense the area, how lonely it must have been without modern communication, I felt a little more compassion for the Judge.

Parked in front of the saddlery in Pecos, I could envision horses and wagons passing by on a dusty road. 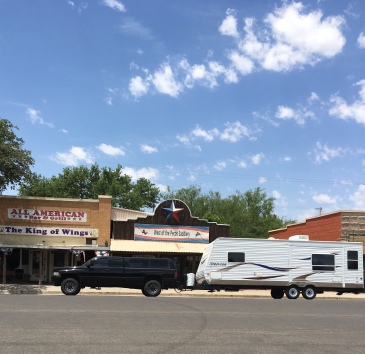 Walking through The Alamo, I imagined that small band of Texans trying to hold on against the odds.  I read the stories of others who fought alongside Davy and saw his rifle on display.  In that place, the childhood hero became a little more human. 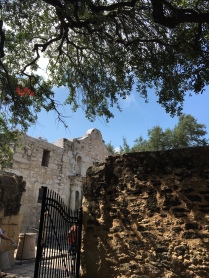 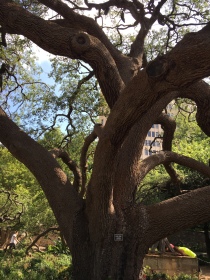 And my grandfather’s tattoos remind me of the responsibility of sharing story and sharing it right.  We tell stories in a tweet, a sentence, a blog post or a face to face interaction.

P.S.  I still think a coonskin cap and buckskin jacket would be cool…

2 thoughts on “davy crockett, judge roy bean and grace in between…”