I’m in a hurry to get things done,

Oh I rush and rush until life’s no fun.

All I really got to do is live and die,

but I’m in a hurry and don’t know why

This song by Alabama used to make me think of a son… the one who was in a hurry to grow up, to get his first job, to get his first truck, to be finished with school so he could join the army, make it his career.  And he did those things… in a hurry.

He said his first ten years would be for career building.  His second ten years he could probably slow down and think about a wife and a family.

Then September 11th, 2001 happened.  Most of that second ten years has been consumed by putting his skills to work in war, surviving war and training others for war.

It occurred to me, quite awhile ago actually, that Alabama song really wasn’t about him at all.  It was more about me… because that what I do… hurry, hurry, hurry.  But why?  I know the answer, but that’s for another day.

He hurried because he was driven.  He’s always known what he wanted to be.  Some people are just like that.  And some aren’t.  And that’s ok.

He was in a hurry to learn and become and do what he was designed for.  And yes, I do believe some are designed to be soldiers and leaders of men in battle… because that’s the kind of world we live in.

I’ve written before about our vacation last June, visiting this son in his Kentucky home.  I won’t belabor that point – although it’s surprisingly easy for a mom to ramble on about her kids – which I’ve been doing for three days now.  One more to go tomorrow.

But I was struck by the calm and peace of his life.  He’s lived thru the worst of the worst.  It’s good to see him enjoying the best… the simple.  It was good to sit with endless cups of coffee and just talk about anything, everything… imagine what lies ahead for him, for our family.

One day as we drove thru the green of West Virginia, and you haven’t seen green till you’ve seen West Virginia (sorry Oregon), he reached over and turned up the radio…. “I like this one” ….

I imagine he knows better than anyone about “those things you can’t change”.  And I’m learning there are better ways to go thru a day than hurry and worry. 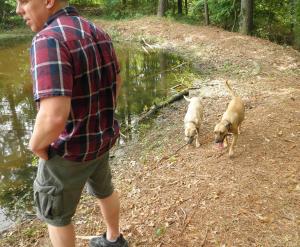