It turns out I collect a lot of paper.  I have a wide variety of child’s art, report cards and letters home from basic training.

Papers touched, decorated and written on by my sons were causing me stress.  I couldn’t bare to throw them away even tho my youngest will turn 30 next month.

So, I talked sternly to myself, weeded out the illegible, the totally unidentifiable, and threw those out.  Then I went to the store and bought four plastic totes – not too big – not too small – just the right size – and labeled them.

I put the best of the best inside.  My daughters-in-law needn’t worry… I’ll hang on to these for awhile.  I just wanted to know they were in a safe place, in a kind of, sort of order.  If the guys ever want to know how they scored academically in the 2nd grade… or what the teacher’s comments said regarding someone’s language skills (you know which one you are), it’s here.

…in which he describes his first haircut as being about “3 millimeters in length and taking most of the surrounding skin with it”.  And the intriguing comment that ” I have, unbelievably, made one mistake. I asked the DI a question without getting permission first”.  Imagine, he only made one mistake.  I am so proud.

But I think the most uplifting item I found was a giant mother’s day card crafted by youngest son, Daniel.  He drew a picture of “The Mother’s ball of smarts”. 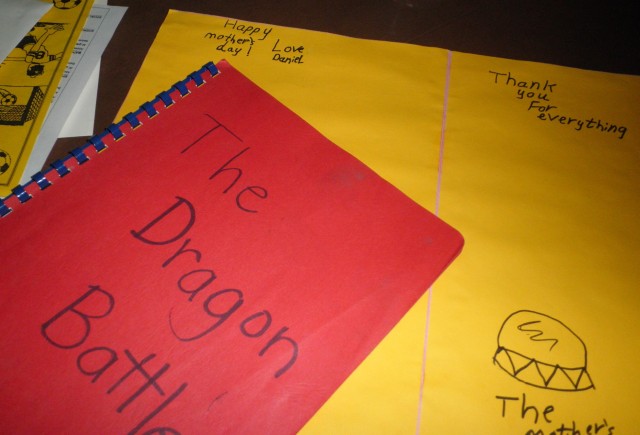 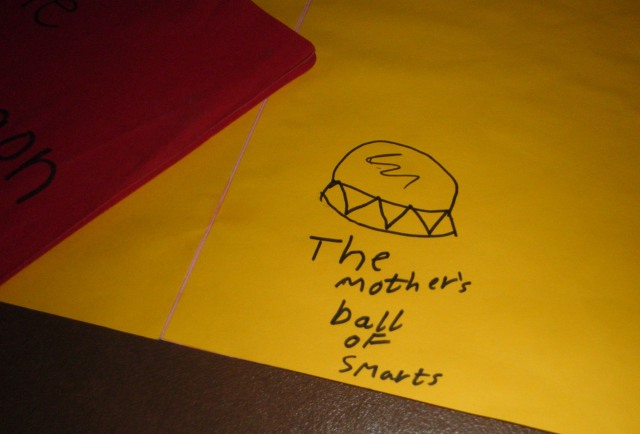 He’s always been extremely observant.  And extremely bright.  I like this kid a lot.

I’d forgotten all about my ball of smarts.  Hopefully it will turn up in one of the other boxes.

6 thoughts on “My Big Ball of Smarts”