When you google how couples stay married for 50 years, you will find many articles such as, “16 Relationship Secrets” and “Four Couples Spill the Secret to Lasting Love”.  You will find videos of cute couples gazing adoringly at one another.  One of my favorite parts of the movie, When Harry Met Sally, are the couples sprinkled throughout telling funny, sweet stories of their lives together.

I wondered if Doug and I would be like that.

I have no pretty platitudes to share.  I have no advice.

We did almost everything wrong.

We went to bed mad.

We argued in front of the kids.

We didn’t plan wisely for our future.

He could never find his keys.  He was always late.  I thought all he needed was a better time management system.  Like mine… which would last about a week until I was on to some new thing.  I didn’t stick with things any better than he did except I wasn’t as, um… flamboyant about it.

I hauled this man to the ER more times than all four of our children combined, twice over.  Then he would find more exciting things to do and other places to be.  He did his best to follow his heart, and I was both angry at and envious of his trying.

I chose to bind my heart in the camouflage of cool, collected responsibility.  It seemed a safe way to cope while married to a tidal wave.  Instead I found that bound up hearts are susceptible to much foolishness.  And there was some of that.

This picture of Doug and I leaving the church, him pulling me through the crowd as we dodge the hail storm of rice, is a snapshot of our 50 years.  Change out the wedding clothes for blue jeans and flannel shirt and it’s us dodging a messier type of storm… the kind you step in with your ugliest mistakes… the type life hurls at you just because it can.

It’s embarrassing to admit, but more than once I was the one willing to quit.  He was the one who wasn’t quitting anything.  And somehow, I don’t know how, we would pull it together again and hobble on a little further down the road.

We did do a couple of things right.  And maybe, our shared sense of humor and love of family provided more glue than we thought.

From the beginning we invited God into our marriage.  Unfortunately, we soon wandered off to do our own thing.  When I thought we had wrecked everything beyond hope, I asked God how my sons could possibly have a normal life with Doug and I as their first teachers?  I really didn’t get an answer, just another question, “so what do you think normal is”?. 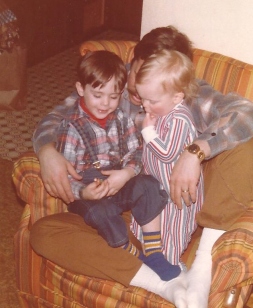 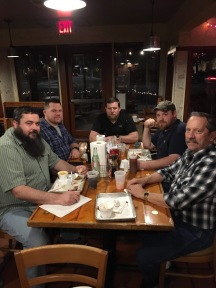 Doug and the Men 2017
As it turns out, these four grew up just fine.  They have beautiful families, homes, careers, and they do good and useful work in this world.  How on earth did all this happen?  Doug and I wandered, but God never let go.  He sent good people along side when we needed them most.  He didn’t give up on us.  And besides, what is normal anyway?

Moving ourselves to Alaska was the one adventure we both agreed on.  It broke a cycle of parental interference and other negative influences.  Along with my kids, I grew up there.  Although that time was early in our marriage, it established a benchmark for me.  Even now, as I muddle through a problem, I am reminded of what I can do now because of what I did then.  They were the best, hardest years I ever loved.

They say you learn a lot about someone when you travel together.  This is a true thing.  Regardless if it’s a trip across country or a trip to the store, we start off with Plan A.  When that doesn’t work we’re pretty good at coming up with Plan B on the fly (with fewer arguments these days).  There have been times we’ve worked through the entire alphabet to Plan Z.  But we always get where we need to go and do what we need to do.  And laugh about it later.

Strength of character isn’t always easy to see until you’ve been stuck in the muck with a person.  I’ve seen it in Doug a million times over, but never so clearly as his fight through chemo with unending good humor,  his ability to hold steady under the pressure of criticism, and the way we’ve stood together these recent years to care for aging parents.

The other day I read an interesting article in the Fall 2019 issue of Magnolia Journal.  It’s about the ancient Japanese art of kintsugi, which is mending broken pottery with gold dust and lacquer.  The gold veins running through the piece look like they were meant to be there all along.  It is mended imperfection, strong and beautiful.

Doug and I had wounds.  They are mostly mended imperfections now.  Some were self inflicted.  Some we gave to each other.  Some are because Jesus said, “Here on earth you will have many trials and sorrows.” (john 16:33)  And He was not kidding.  His word is true.

Rather than veins of gold, I figure Doug and I should be gold plated by now.  Maybe that’s why they call 50 years of marriage the “golden” anniversary??  I don’t know.

Actually, I guess I do have one piece of advice to humbly offer – – when you’re ready to quit anything, a marriage, a job, your latest healthy eating plan, your faith – –  decide to hold on for just one more day.  Just one more.  They will add up.  You get smarter.  You get stretchy and bendy like Gumby, yet strong like Superman.  And like my grandpa always told me, “it will all be okay”. 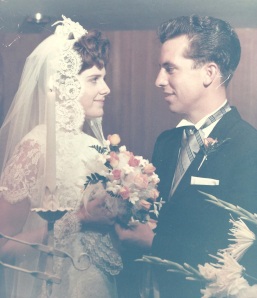 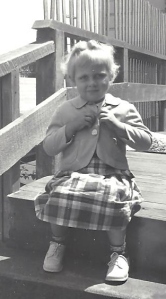 Brooke about 4
Douglas John McGillivray from Burnaby, British Columbia and Brooke Cherith Jamison from San Francisco, California, got married and made it last 50 years.