Doug and I wake early every morning.  He gets dressed and drives a few miles down the road to his favorite coffee shop, joins a group of farmers and truck drivers and together they solve the world’s problems.  Or, at least they give them a good talking to.  Later he tells me about the guy who smells really, really bad every single day, the guy who argues with everyone about everything and the latest hot topics.

Staying home, I put on the first and most delicious pot of coffee of the day.  I usually open windows because fresh morning air is a favorite thing.  And often I go out on the deck to take pictures of the sky.  But always, I end up sitting in a comfortable place with my journal, my books, my Bible and peace.  And coffee.

This is how we connect with a new day.  His does not appeal to me.  Mine would never work for him.

When we go to a social event, Doug is actually excited about it, while I’ve spent the previous week worrying about it.  Before we get there, I have been known to ask when he thinks he might be ready to leave.  The more folks to talk to, the happier he is.  Conversely, my chit-chat tank is very small and when it’s empty, I look for a safe place on the sidelines.  If I can join or start a conversation about a shared common interest, then I’m fine.  And when it’s over, even if I had a great time, I’m wiped out.

If we have a question we can’t resolve or the new thing doesn’t work right, he picks up the phone and calls around until he gets his answer or hits a dead end.  I will read the instruction manual or google the answer.  Our success rates vary.

He loves to talk on the phone.  I will forever be grateful for the invention of texting.

A couple years ago, Doug joined the local chapter of the Izaac Walton League.  He chose to be a volunteer.  Every hour he spends there on range clean-up day or as a volunteer for special events, knocks down the cost of membership.  So he saves a little money, meets interesting people and gets to spend time outdoors doing something he loves.  I would have paid the membership dues and been done with it.

While taking care of our parents and getting older in the process, I’ve noticed a big difference in how Doug and I handle stress and the lack of freedom.  He does it much better.  He maintains his interests, stays connected to the outside world (smelly coffee buddy and all) and still pulls his weight in our joint responsibility.

To have healthy, outside interests, like Doug does, is exactly what my hospice chaplain friend (mentioned last week) was talking about.  Unfortunately, I have been focused on the burdens and unrealistic expectations of what I think my life “should” be.

My way of inward reflection is not a bad thing.  But at some point you have to step out and do something.

In an uncharacteristically bold moment at church last summer, I offered to lead our women’s bible study group on Monday mornings.  Kicking myself all the way home, I hoped Doug would tell me he had appointments every Monday morning and couldn’t possibly stay with Mom.  But, of course… he did not say that.

So for the passed year we’ve slowly worked our way through Luke’s gospel and into Paul’s letters to the church.  I show up feeling out of my element and end the time among friends.  I’ve learned a lot about the subject matter, but even more about this great group of women who have shared their lives and experiences with me as I have with them.

We’re taking a break for the summer and I will miss this.  The bible study has been good, but better still the relationships that are forming… which, I suspect Jesus would say, is the real purpose of it all.

This may not sound the least bit interesting to anyone else, but for me it’s a small step toward making life more enjoyable during a complicated season.

And small steps are good.  They lead us forward.  Next week I’m writing about steps which are moving me to more realistic expectations on a subject dear to my heart. 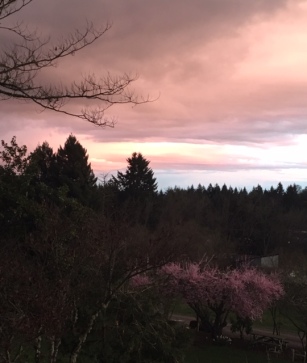 6 thoughts on “the age of reality… connecting, introvert style”