They slid quietly onto the benches looking much like we did when we first arrived.

Red-faced with sweat dampened hair, three teenage girls took an open bench for themselves. Mom and two small boys, maybe 5 and 8, took a seat behind them on a bench already occupied.  Somehow the three of them squished into a space that was meant for one adult.

Needing to find – 1) a place to sit and 2) some shade, Doug and I and our 13-year-old grandson found ourselves at the County Fair Fiddle Contest last week.  Since our grandson plays the violin (and also football – he would want you to know!) and loves fiddle music, we had planned to attend anyway.  We finally found the venue after an hour of wandering in the heat through 4-H exhibits, covered by the smell of greasy fair food.

But this one mom and her two little boys, they captivated me.

Her strong arms wrapped around their waists and their small, suntanned arms around her neck.  Toes tapped to the music.  There was whispering and giggling, but kept to a respectful volume.  Her smile was constant.  She let them take turns to alternately sit on her lap or hang off the side of the bench.  It looked like an uncomfortable arrangement to me, but didn’t seem to bother them.

Watching them, I missed my boys at that age.

And I kind of wanted to take their picture, but thought that might be a little creepy.

As it turns out I didn’t need an actual picture because the mental image of them stayed with me all week.  I was in a wistful frame of mind that day anyway, trying to cram a pile of memories into 2 days with a grandson who is growing up too fast for my taste.

I remembered an older woman who chastised me years ago for the level of attention and affection I showed my sons.  It would spoil them.  It didn’t seem appropriate in her mind.  In my mind I worried that I didn’t give them enough.

I gave her the benefit of the doubt that she meant well then.  Just as I give it to her now, and to myself that I did OK.

When it comes to little sons, I am convinced there is no such thing as too many hugs or too much cuddling on the sofa or too much lounging on the bed with story books.  Is there an age limit to sitting on laps, holding hands, giggling, and public displays of affection? Probably.  But that’s something we figure out as we go.

So last week at the fair, I enjoyed fiddle music and snow cones with my grandson.  And it was good.

Soon enough he will walk away to his own grown-up life like his father did.  And while I pray he has his share of good things, I know he will have his share of adversity and hard lessons.

We only have them with us for a short while.  I’d like to think the foundation of love, attention and shared experiences give them strength and confidence along the way.

And I’m thankful for “fiddle contest mom and sons”.

The sweetness of their connection helped me remember a thousand little images never captured on film, but captured instead on my heart. 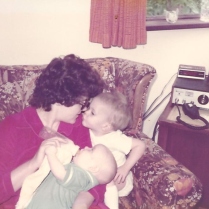 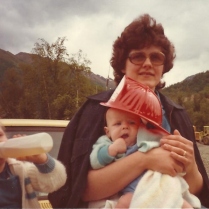 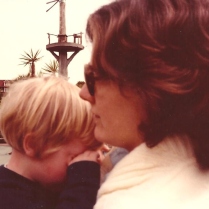 One thought on “loving little sons”