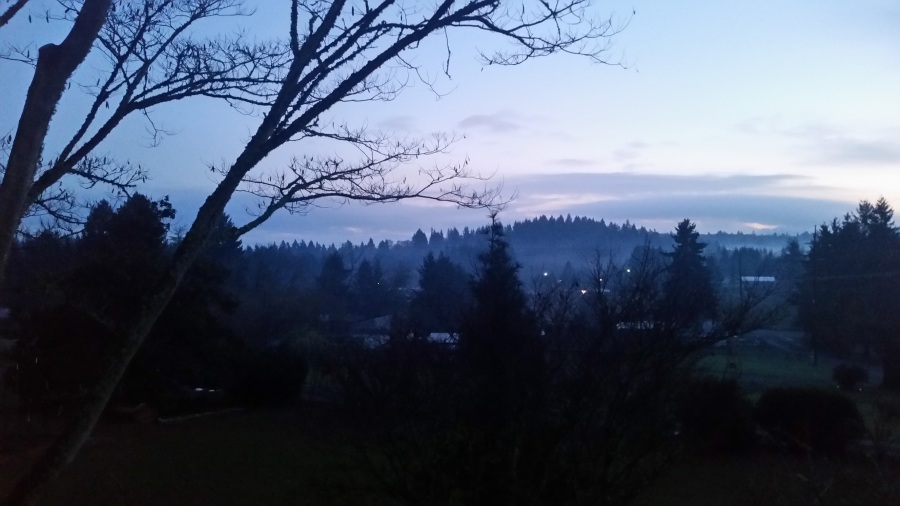 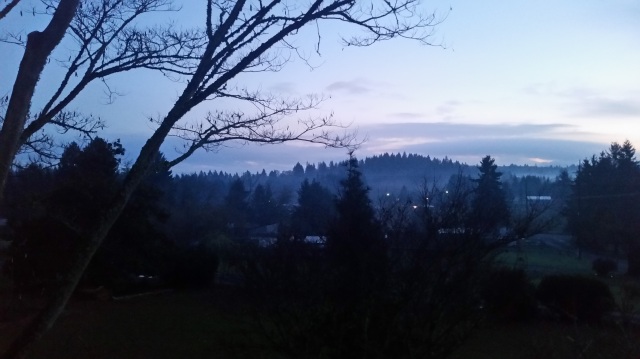 Across the valley yard lights blinked on.

They drew me onto the back deck to snap a picture, not an uncommon practice for me.  The view never disappoints.

It was chilly outside, warm and cozy inside.  I’d taken the cornbread out of the oven and soup was simmering on the stove.  Stepping outside, I had this irrepressible urge to call my boys in for dinner.  If they weren’t fully grown men, with families of their own living far, far away, I would have.  They like cornbread.

How odd.  I couldn’t help but wonder who/what needed to come in to who/what.  The internal message persisted and days later I still hear it.

I’ve spent an inordinate amount of time gazing off the back deck into the clouds, the hills, the trees.  And while I pay proper respect to the beauty of God’s creation, I must admit, I’m looking farther than that.

I look for what I cannot see.

After years of steady work, a family raised, and retirement from the 8 to 5 work world I moved on to living the commandment of Honor Your Father and Mother.

Back to back tours of duty with aging parents.

While it hasn’t been easy, I don’t regret this life choice.  My time is certainly full.

But still, I wonder what else there could be.  So I go outside, stare into the clouds and ask God what happened to those goals and hopes I had.

My random memory of calling sons into supper is sweet.  And what happened around that table, besides the consumption of great amounts of food, was life giving to me… hopefully to them.  We talked, argued, laughed, teased, hoped and dreamed.  There were plans made and plans launched around that table.

It’s been a couple weeks now and still I hear “it’s time to come in”.

I’m beginning to get a clue.

I’m just supposing that as much as I loved calling my boys in at the end of the day, my Heavenly Father loves the same thing.  He made me this way after all.

And I’m just supposing that maybe the message, which has now lodged fully in my heart, is His way of telling me to enjoy the trees, but just take the picture already…

…then come on in to Him and make a plan.  An actual plan.

My goals and dreams are still out there.  At this point many are still doable.  But not forever.

This week I took the step of blocking out time on my calendar to write each day.  Like an actual appointment.  So far, so good.  Tomorrow I’ll build upon today and next week and the week after.

I know I’ll be tempted to forget the goals and drift.  It’s easy to do.  And it’s never easy to press on.  But a big thing occurred to me this week….

The God who created me, who loves me, who gave his ALL for me, did it for a purpose. I doubt it was so I could stare at clouds.

Some folks pick a word of the year, a word to inspire and reflect on.  I think God gave me a whole phrase…..

And this time I know what I need to do.