Black Beauty left this week.  Somehow, Someway, she made impact with a stationary object.

I know NOTHING about that.

I do not drive her.  Really.  The person who does might have more to add, but that’s all I’m sayin’. 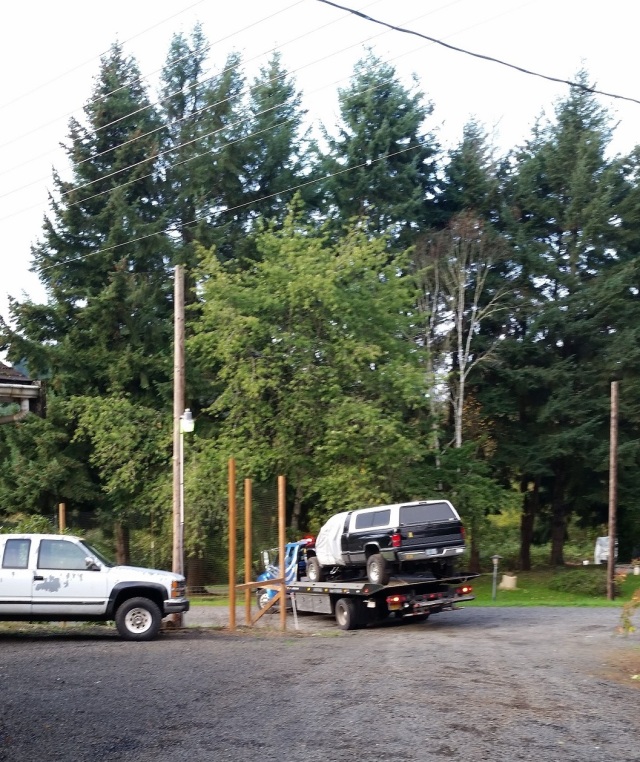 In the meantime we’ve acquired, supposedly on a “temp basis”, an old farm truck that had been put out to pasture.  His name is Frankenstein.

I just call him Frank. 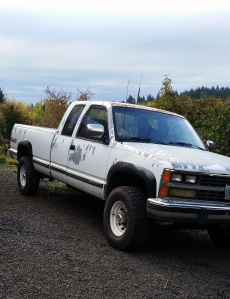 Frank’s paint is peeling.  He’s old.  He used to be a diesel, but someone decided he should run on gasoline.  So when you look under the hood there’s a big empty space and some weird things that don’t connect anywhere.  And that, ladies and gentlemen, is the extent of my mechanical knowledge.

Last week we took Frank for an overdue trip to the dump.  As soon as Doug connected the trailer hitch I swear I heard Frank say, “are you kidding me?!?!?…”

But Frank got us to the dump anyway.  He rumbled along steady, even with a heavy load.  And he made it back home, which is always a plus.

As we backed into the driveway, Frank suddenly rattled, wheezed and blew steam everywhere.  Poor guy.  I was beginning to like him.  He’s soft and comfy on the inside.  I can climb into Frank without hurting myself.  And he runs like a champ, even if he is old, tired and patched together.

But honestly, I didn’t want to like Frank.  My husband has a penchant for collecting vehicles like I collect sets of dishes.  And we have more than enough of both.

The truth is, I’m beginning to identify with Frank.  I feel on the inside how he looks on the outside… a little rough, a little rugged, a little tired.  And when I get tired, it really isn’t pretty.  Do I need new vitamins?  A new moisturizer?  Or maybe, a complete make-over like Black Beauty will get over the coming weeks?

More seriously, can I keep up with what life demands?

As for Black Beauty, her door is bent so badly it won’t close.  She’s on her way now and will come back with some new parts on the inside and a shiny new coat on the outside.

Frank’s doing a lot better.  He got a tune-up and a part or two.  He doesn’t spew steam anymore.  And I don’t care what he looks like on the outside because I know him on the inside.

As for me, I know nothing else than to rumble along steady, do the job God expects of me and come back home when I’m done… kind of like Frank.  These words say it better:

Take a new grip with your tired hands and stand firm on your shaky legs.  Mark out a straight path for your feet.  Then those who follow you, though they are weak and lame, will not stumble and fall but will become strong.  Hebrews 12: 12-13

…and I’m trying a new moisturizer.  Hey, it can’t hurt.

2 thoughts on “Black Beauty and Frankenstein”