Doug and I don’t get much couple time anymore… unless you count TV after dinner… until one of us conks out… and that would be him.

Sometimes I arrange for a caregiver on Saturdays.  Typically we’ll spend that day working on the never-ending projects at our old house.  And that’s OK with me.  It’s a day together.  I appreciate that which I took for granted for so long.

We’ve also gotten into the habit of stopping for breakfast on those Saturdays… at Sharon’s Cafe.  Recently our server commented, “your order won’t take as long as last week”.  Which means she’s beginning to recognize us as regulars… and it feels kind of nice to be a regular… to be remembered.

Every time we pull up to Sharon’s though, I see us eating pancakes in Alaska, with my father-in-law.  The rest of the details are a little sketchy.

This time I mentioned it to Doug.

“Oh, yea… Pioneer Café near Teeland’s Corner… they had the same wainscoting on the wall.” 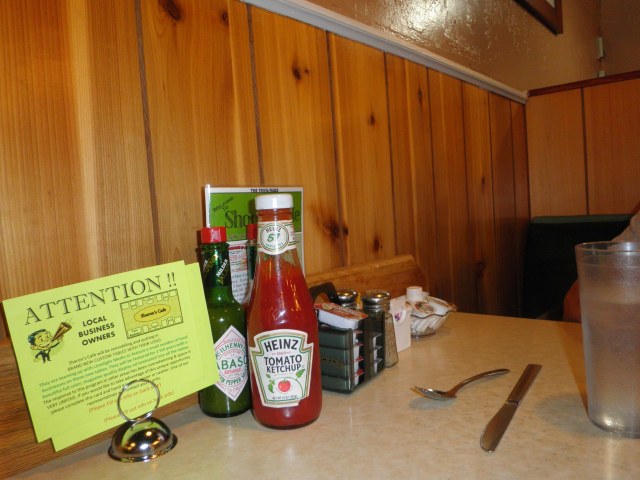 Cliff made several solo trips to Alaska during our early years there.  He briefly owned a piece of property near us… he joined Doug for a moose hunt… and he even worked at Prudhoe Bay for a while.  Wherever we lived was his temporary home base.  And on Saturday mornings we went to the Pioneer Café for breakfast.

He always ordered a short stack of pancakes, although he called them flapjacks, and coffee.  He enunciated “f-l-a-p-j-a-c-k-s” slowly, deliberately… I think he just loved the sound of the word.   When his flapjacks arrived, they were buttered, stacked and cut in straight, even rows… then crosswise in perfect little squares.  He carefully drizzled maple syrup on one small section at a time.  No soggy flapjacks for that man.

It’s interesting how we associate place with people and life events.  Maybe that’s how our memory keeps it all tucked in and held together.  For example, I’ve flown into Sacramento Airport more times than I can count.  And until recently, the same two people stood at the bottom of the escalator, right next to baggage claim, waiting for me… my Mom and Dad.  They don’t drive anymore.  And the next time I fly into Sacramento I know they won’t be at the bottom of the escalator… but I’ll still see them standing there.

Last week I stopped at the post office.  A clerk I’d never seen before looked at a piece of my mail and said, “I know that name!… Cliff?”

It turns out, aside from the fact he had changed his breakfast preference, she used to wait on him at the small café he frequented here.

“He was funny… thanks for the memory jog” she laughed… “I just loved that man”.