I’ve known my husband over 43 years.  Doug is an original thinker.  He’s not afraid to try the untested.  He has faults, but being wimpy is not one of them.

It’s one thing to sit behind a computer screen and type what you believe….it’s something totally different to stand in front of people and say and/or do what you believe …and run the risk of criticism.

We’d been married 6 years by the time our journey to Alaska began.  During those years he’d been involved in multiple business attempts, 2 or 3 different jobs and a couple of starts and stops at college.  A lot of change to pack into 6 years.

I was confused by it all …. sometimes angry.  We had a child.  Not to mention, my own goals and dreams were paying a price.  There were times I felt like quitting, but couldn’t get passed that “for better or worse” thing.

I’ll give it to Doug that he was (is) a hard worker.  He put himself out there 110%.  He was struggling to find that elusive “something”.  It wasn’t an easy time. 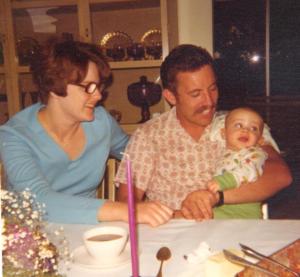 Unfortunately, his choices labeled him.  A friend from church once told me we were viewed as the couple most likely to divorce.  Nice friend.  Every different job, business attempt, whatever…. was just another “Doug thing”.  And so the move to Alaska was viewed by some as another crazy “Doug thing” that wouldn’t fly.

But as said in the last post, this was different.  After the shock wore off, I felt right about what we were doing.

Some will never agree, but I think it was perfect timing (except for being pregnant and toting a toddler with us, oh, and it was still winter!).  We both had excellent job skills.  No matter where we went we knew we could work.  We paid off all our debts after selling the house.  A big bank account would have been nice …but we didn’t have that.  We had enough money for our needs….and enough dreams and plans for 20 people.

Doug bought a used Dodge, medium duty, tilt-cab truck with a 16 foot box.  Inside that box we packed our earthly belongings.  The plan was to drive to Seattle, take the ferry to Haines, Alaska, then drive to Anchorage.

Doug and his dad, Cliff, built a special “perch” in the cab for Ian.  I suppose taking a two-year old on such a trip was not the most brilliant thing in the world, but it was what it was.  So Ian had his own special place….he could sit between Doug and I, or lay down and sleep, or play with his toys.  It was a soft, cushy, warm little spot.

When the reality of our move finally settled in, my mother flew into high gear with her sewing machine, Doug’s mother with her knitting needles.  My dad, Cliff and Doug were constantly tuning and tweaking the truck.  And they spent many exasperated hours packing and re-packing all of our “must haves”.

If we knew then what we know now, we’d have taken very little.  Our thought was to take all the basics to set up a household when we got there.  For all of our selling and giving away…we took far more than we needed.

So, we spent a last Christmas in the first house we ever bought……….

We moved in with Doug’s folks for a few weeks………..

We drove our big, old truck onto the ferry, MV Columbia on a Friday morning in Seattle……………

………early the next Monday morning we disembarked in Haines.  Our feet were on Alaskan soil, well, snow.  We ate a big breakfast, piled in the truck and headed for the Canadian border. 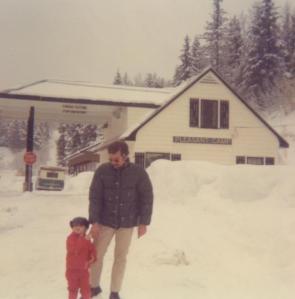 This was the day the real adventure began.