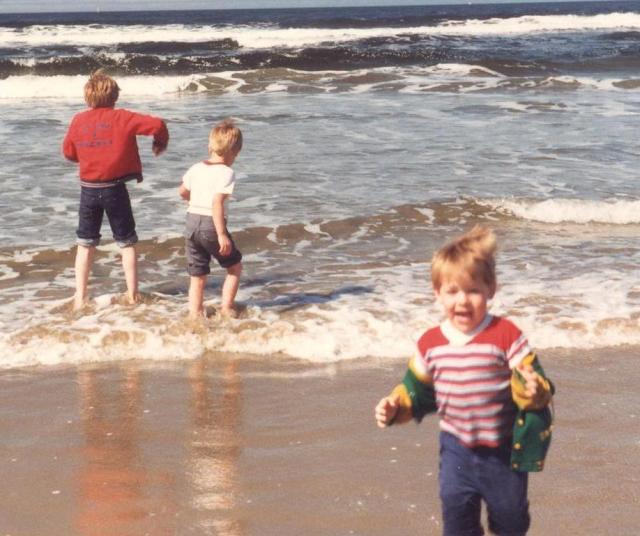 My youngest son turned 29 last week and it reminded me how much I hate flying.  Conversely, I flew a lot last week and that always reminds me of Daniel.

Does it not occur to anyone but me how unnatural it is to hurtle thru space in a metal object?  And while you’re up there nothing good happens.  You alternately freeze and sweat, there’s always someone sneezing and strange people fall asleep on your shoulder.  I flew for years with a baby or toddler in arms…first flight with a seat to myself and the lady next door spilled coffee in my newly emptied lap.

A couple years ago Doug and I flew home after a conference in Las Vegas.  Moments before boarding a very rumpled, hygienically challenged man staggered into the area.  He stood awkwardly, kind of swaying with a creepy, leering expression.  You know the phrase..”what happens in Vegas stays in Vegas”?  He looked like he was trying to take it home with him.  I began to feel very sorry for his seatmate…which turned out to be me, which is why I know he was hygienically challenged.

We used to fly in and out of Alaska quite often.  On this particular trip it was just me and the boys returning to Anchorage from San Francisco.  Earlier in the morning a plane had crash landed at Dallas-Ft Worth, blamed on extreme wind shear.  The crash caused numerous delays across the country and for my flight as well.

As a white knuckle flyer anyway, this did not help.  Two hours later, my once freshly scrubbed, combed and pressed boys boarded with me on our way to Seattle.  Shirts were un-tucked, Ian and David (almost 12 and 9) were locked in verbal combat, Daniel (3) had lost a sock, Andrew (4) had gum in his hair…I did not care.  Just wanted to get this flying thing over with.

In Seattle we missed our connection, found a new flight but were delayed again due to mechanical difficulties.  O, great.  Finally boarded..then had to get off.  They decided to bring in a new plane.  We were supposed to be home for dinner, Anchorage time.  As it was we didn’t leave Seattle until 10 p.m.  I tried to call Doug from a public phone (pre-cell phone era…yes, there was such a time) but no answer.  Boy, would he be cranky by the time we landed.

So we’re flying, flying….weather’s a little stormy..fair amount of turbulence.  I’m trying to be calm…don’t want my boys to see what a weenie I am.  For Ian and Andrew this flying is no problem.  Ian would fly a carpet  if there were actually flying carpets.  Andrew was just a happy little kid that rolled with whatever…….they were both sound asleep.

David and Daniel seemed to be a bit more affected by my nervousness vibes…for which I’ve apologized many times.  David didn’t seem to like flying any more than me and was looking mighty grumpy as we bumped our way thru the sky.  Daniel had not slept all day and had a grip on me that was really quite painful.  I held him on my lap, tried to comfort, begged him to sleep…that wasn’t happening.

With about an hour and a half flying time left the turbulence picked up significantly.  Even the flight attendants had to take their seats and buckle up.  Suddenly the plane dropped violently.  A woman yelled (no, not me) a word I cannot repeat.  And I hear a deep, booming man voice scream, “I DON’T WANNA DIE!!!!”……..except the voice was coming out of my tiny, little child.

It was one of those split second events that feels like an eternity during which many things are happening at once.

“Mom!  Shut that kid up!” from David………in my head I’m screaming right along with Daniel….passengers are looking at us like they’d throw us out the window if they could….Andrew and Ian are sleeping.

Obviously we made it home.  After the big event the rest of the flight was fairly calm and Daniel fell asleep…just as we were beginning our descent.  Doug pretended to be ticked off when we landed, but I knew he was actually happy.

So this is why Daniel and flight are forever linked in my brain.  I try to look for good things in all that happens so I will say I appreciate how flying gets me places I want to go a whole lot quicker than walking.  Plus, it enhances my spiritual life because I spend a lot of time in prayer before, during and after.

Daniel grew up and has a beautiful family.

His deep, booming man voice fits him much better now.

I don’t think he screams anymore.

2 thoughts on ““it’s safe to move about the cabin””